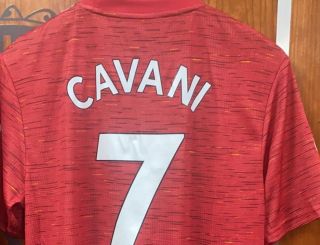 The Uruguayan striker has been named on the bench as United take on Chelsea in the Premier League.

Yet to make an appearance in United’s red, Cavani could come on as a substitute which signals the strength of players Ole Gunnar Solskjaer has available to him.

Cavani has been named on the bench alongside Paul Pogba, Donny van de Beek and Mason Greenwood.

I have no doubt that Frank Lampard will be asking his players to get off to a quick start, but things could get ugly if United come out firing from kick-off.

Cavani uploaded a photo of his match day shirt to Twitter, expressing excitement at playing his first game for the club: “Beautiful responsibility. Eagerly looking forward!!”

The former PSG striker will give United something different in attack and in Anthony Martial’s absence that may well be needed to win today’s match.

Read more: Loads of Man United fans give their pre-match score predictions ahead of Chelsea match