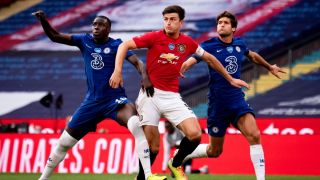 Manchester United followed up their dismantling of Newcastle with an impressive victory over PSG midweek. Ole Gunnar Solskjaer will be hoping his players show a degree of consistency against the Blues to get the job done with all three points added the board.

Our starting eleven is the same as it was against Newcastle, as per @ManUtd, which some might argue is harsh on Axel Tuanzebe after his excellent performance on Tuesday night.

Chelsea did not have as good a week, drawing with Southampton in the league and Sevilla in the Champions League. They are also leaking goals (not that we are much better this season) and can be beaten.

It seems set up to favour Solskjaer, though.

The Reds did the double over Chelsea in the league last term without conceding a single goal. However, the last time these teams met Frank Lampard’s side went through to the FA Cup final.

🚨 Ole names an unchanged side from our last @PremierLeague game…

And there's a new boy on the bench 👀#MUFC #MUNCHE

Let us know your thoughts on the starting line-up in the comments section below.