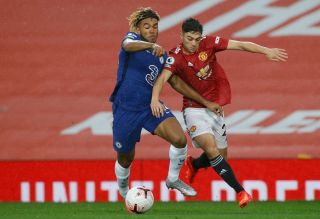 Manchester United and domestic rivals Chelsea are currently embroiled in a tense and cagey all English stalemate at Old Trafford.

The eagerly anticipated Premier League match-up has so far failed to spark the excitement of fans after an opening 45-minutes have ended with neither side opening the scoring.

United came into tonight’s game off the back of a impressive away with against Paris-Saint Germain in the Champions League during mid-week, however, the Reds have so far failed to emulate Tuesday’s exciting performance.

Elsewhere, Frank Lampard will be desperate to get one up over his arch-rivals in Red as he seeks to get his newly-formed Blues firing on all cylinders.

United came closest during the first-half after Juan Mata and Marcus Rashford’s efforts both forced Edouard Mendy into action.

Despite the two decent efforts, the Senegalese shot-stopper refused to let his United counter-parts go one up on the score board.

As the two sides go into this evening’s break all square at 0-0, fans have taken to their social media to express their first-half thoughts with Daniel James being singled out for an underwhelming first 45-minutes.

Any chance we could merge Mata’s footballing brain with Dan James’ speed?

Both teams have had an agreement for a 0-0 😅