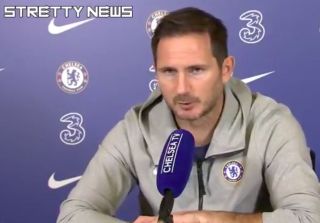 Frank Lampard has described Manchester United as a ‘quality side with quality individuals’ as his Chelsea team prepare to face the Reds at Old Trafford.

While the league is very much in its infancy, United can leapfrog their direct rivals with a home victory and Lampard has acknowledged the importance of a positive result on Saturday evening.

Chelsea drew 0-0 against Sevilla in the Champions League group stages in midweek, but have shown defensive frailties early on in the season by conceding three goals to West Brom and Southampton.

The victory over Paris Saint-Germain in the Parc de Princes will surely give United huge confidence against Lampard’s side.

But the Blues have serious attacking firepower including Kai Havertz and Timo Werner and it wouldn’t be a surprise if Solskjaer sets up with a five-at-the-back system like he did on Tuesday night.

Listen to Lampard’s pre-match thoughts below: