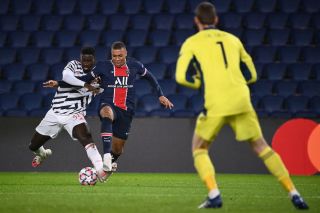 Tuanzebe made an outstanding return from 10 months out with a near exemplary performance in Tuesday’s Champions League group stage victory over Paris Saint-Germain in the Parc de Princes.

The 22-year-old was arguably man-of-the-match after a surprise inclusion in the starting XI as he marked PSG superstar Kylian Mbappe out of the game.

There is little doubt that Tuanzebe has the qualities to become a first-team regular under Solskjaer if he can remain fit this season. And according to ESPN, Solskjaer has even bigger plans for the academy graduate.

ESPN report that Solskjaer and other senior United officials believe Tuanzebe’s pace and ability to read the game, added to his leadership qualities, make him future captain material.

Tuanzebe has been impressing on and off the pitch at the club, which was what made his lengthy setback all the more frustrating.

The defender has already captained United once, leading the Reds out in the Carabao Cup fixture against Rochdale in September 2019.

And there is every chance he could lead out the side again in the long-term future if he can consistently deliver performances like the one in Paris in midweek.

We expect Tuanzebe to have some involvement as United take on Chelsea at Old Trafford in the Premier League on Saturday evening.