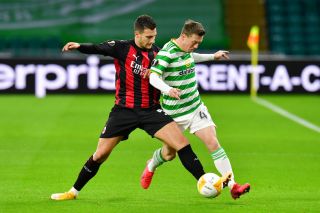 Diogo Dalot made his AC Milan debut last night and has already pledged to become a ‘complete player’ having joined the Italian giants on loan during the summer transfer window.

Reputable journalist Fabrizio Romano reported for Calciomercato.com earlier this week that the Serie A side are convinced that they have made a great coup in Dalot.

Last night they finally got to see him in competitive action and it was a first glimpse for their fans.

The Italians came away from Celtic Park with a 3-1 win, so the Portuguese full-back will be happy with his first outing as a member of the Rosseneri.

Popular AC Milan blog SempreMilan.com gave Dalot 6/10 for his performance against Neil Lennon’s side, writing: “Positive debut from the Manchester United loanee. Lost the ball quite a bit, but overall looked fine in the flow of the game and will no doubt see improvements as he gets more game time.”

It’s great to see Dalot get experience like this in Europe against teams like Celtic because he could come back a better player. We are not stocked enough at right-back but Ole Gunnar Solskjaer has Timothy Fosu-Mensah to fall back on if Aaron Wan-Bissaka needs a rest throughout the season.

We are very light at right-back other than that, but I’m sure Solskjaer will give opportunities to youth players or even Brandon Williams given there is more competition for places on the left flank following the arrival of Alex Telles from FC Porto.

Check out this article we did with Sempre Milan on Dalot after the loan deal was announced.