Manchester United are currently preparing to head into a mouth-watering match-up against Frank Lampard’s Chelsea when the two sides meet at Old Trafford on Saturday in the Premier League.

Coming into the weekend’s domestic game off the back of a superb Champions League opening 2-1 win over last season’s finalists Paris-Saint Germain, Ole Gunnar Solskjaer will be hoping to continue the Reds’ impressive run of form.

Ahead of the weekend’s exciting match-up, we have looked at how we expect Solskjaer to line his youthful Reds up.

United’s number-one was back to his best during the Reds’ impressive 2-1 win over Paris-Saint Germain earlier this week and will be set to start again against Chelsea.

How can Solskjaer not name the 22-year-old centre-back in his starting line-up on Saturday?

Tuanzebe had the game of his life against Paris-Saint Germain as he went toe-to-toe with world-class duo Neymar Jnr and Kylian Mbappe.

The United defender has emerged as a strong contender to be the Reds’ best centre-back, forming a partnership with club captain Harry Maguire should be a high priority.

I fully expect the young Englishman to be awarded his second start of the week when the Reds line-up against Chelsea on Saturday.

Assuming Maguire is back to full fitness, I expect him to be recalled to the Reds’ starting line-up on Saturday.

Played a centre-back role as part of a back-five against Paris-Saint Germain and had one of his best ever games.

I wouldn’t be surprised to see Solskjaer opt to reinstate his big game go-to tactic of five at the back again on the weekend.

I fully expect the new Brazilian to feature in an attacking wing-back role again against Chelsea.

Put in a superb display against Paris-Saint Germain, hurried the Ligue 1 champion’s midfield excellently and when in possession carried the ball brilliantly through the channels.

Hard for Solskjaer to drop the Brazilian to the bench on the weekend; I expect him to retain his place in the starting side.

Surely the Dutchman is due his first Premier League start sooner or later?

I wouldn’t be surprised to see the former Ajax man named in Solskjaer’s starting line-up against Chelsea with team-mate Paul Pogba eyed to come off the bench later in the game to have the same impact he did during the week.

Has been United’s goalscoring hero on more than one occasion already this season. Stepped in as captain during the week and put in a fine display.

Assuming no freak injury, there is no way United’s number-18 doesn’t start against Chelsea.

Sat out United’s last two games but with team-mate Anthony Martial serving a three-match ban, Greenwood will be recalled to lead the line against Frank Lampard’s Blues.

United’s Paris hero during the week, in fine form both on and off the pitch, similarly to Fernandes, assuming no late injury or fitness concern, the left-sided attacker will start again on the weekend. 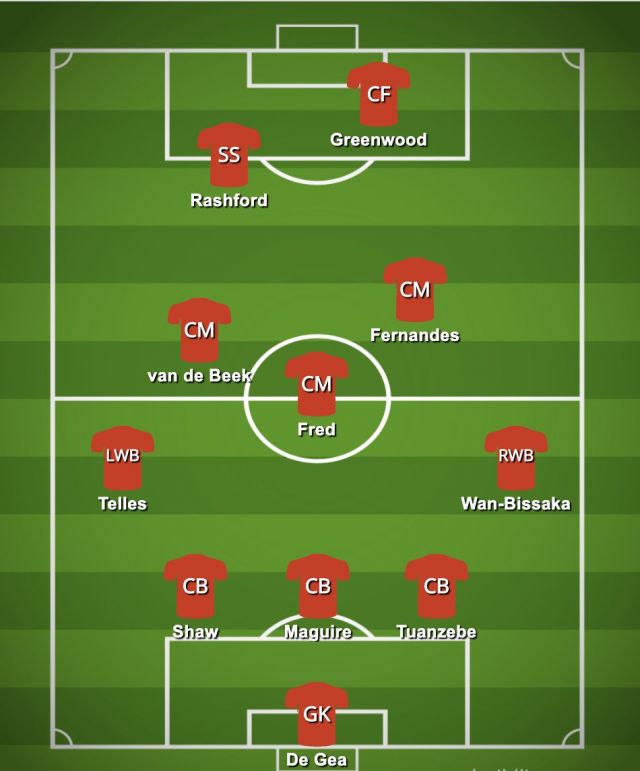 United’s Premier League match against Chelsea is scheduled to kick-off at 17:30 UK time on October 24.