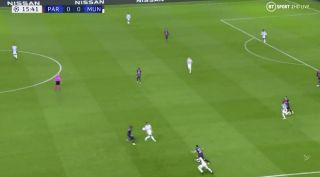 Manchester United duo Bruno Fernandes and debutant Alex Telles are showing early signs of being on the same wave-length after the pair seamlessly combined down the left-hand side of the Parc des Princes pitch.

Making his debut tonight, Telles is operating as an attacking left wing-back with newly named captain Fernandes situated in his regular creative role.

The pair who both have previous experience playing against one another in Portugal’s top-flight have so far linked-up superbly during the Reds’ Champions League tie against PSG.

The latest example of the pair’s cohesion comes whilst on the break with Fernandes laying a beautifully weighted ball off into the path of the on-rushing Brazilian defender.