The Reds face PSG at the Parc de Princes on Tuesday evening and will be hoping to replicate that famous victory in March 2019.

But the daunting task of facing the French champions has become more difficult with a number of injury problems Solskjaer has to deal with.

Solskjaer had to get creative with his attacking set-up against Newcastle on Saturday with centre-forwards Edinson Cavani and Anthony Martial both absent.

And the Norwegian will need to be flexible with his defensive setup if the Reds are going to thwart superstars Kylian Mbappe and Neymar.

As reported by the Manchester Evening News, Harry Maguire did not travel to Paris with the rest of the squad so is unlikely to feature.

The MEN’s Rich Fay has confirmed in a tweet that Maguire and Eric Bailly are both ruled out, meaning Solskjaer has a serious centre-back shortage.

The extent of Maguire and Bailly’s injuries are not yet clear but Solskjaer is likely to be asked about their availability in Monday evening’s pre-match press conference.

Their absence could prompt a formation change from Solskjaer, with Luke Shaw slotting into the left centre-back position where he was effective last season.

This would allow Axel Telles freedom to roam further forward on his first United start.

Axel Tuanzebe hasn’t started a game since last December after a long injury layoff, but could be thrown straight in at the deep end having returned to training.

Alternatively, Solskjaer may choose a more conventional back four with Shaw or Timothy Fosu-Mensah partnering Lindelof in defence.

Meanwhile, Paul Pogba and Nemanja Matic were both rested against Newcastle and are likely to return in a double midfield pivot.

Bruno Fernandes is indispensable for the Reds and could start in behind a dangerous attacking duo of Anthony Martial and Marcus Rashford.

Martial has served one of his three game domestic ban so is almost certain to start in the Champions League. 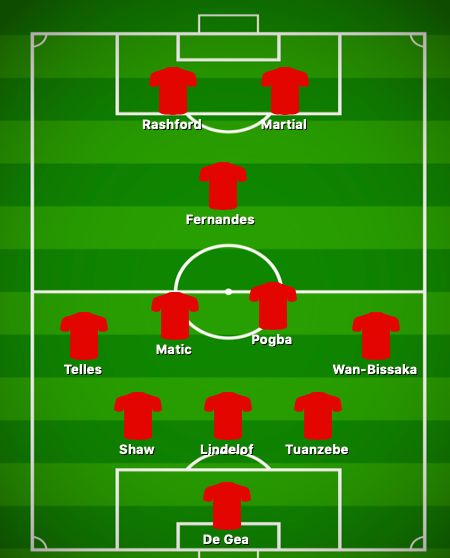