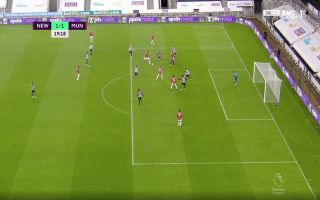 In the 20th minute of tonight’s Premier League clash against Newcastle, it looks as though Manchester United had drawn level thanks to a lovely team move capped off by Bruno Fernandes.

Mata sparked the move from the left side with a run and then pass into Dan James, the Welshman then laid it off to Fernandes, with the playmaker playing a tidy one-two with Mata.

Fernandes rounded off the move by curling the ball into the back of the net, but unfortunately Mata was offside in the one-two leading the goal to be chalked off.

Thankfully this provided the momentum needed for skipper Harry Maguire to bag the equaliser with a towering header from a corner, all thanks to Mata’s inch-perfect delivery.