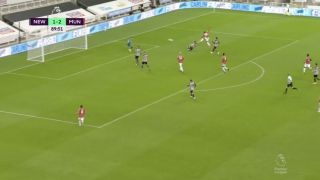 Manchester United’s right-back Aaron Wan-Bissaka is not best known for his ability to take the net off it’s hooks but that’s exactly what he has just done.

At the turn of the 90th-minute the young full-back found himself in uncharted territory deep into Newcastle United’s final third and came to the realisation that the only option was to unleash an absolute rocket.

Marking his 50th United appearance off in style, Wan-Bissaka fired the ball into the top corner and in turn put his side’s match against the Magpies out of reach.

Wan-Bissaka’s goal help to ensure that the Reds go marching on after beating Newcastle United 4-1 in a thoroughly deserved victory.