Despite guiding the Reds to an improbable third place finish in the Premier League just three months ago, pressure is mounting on Solskjaer after a dismal start to the new campaign.

United have conceded 11 goals in their opening three league games and Solskjaer must elicit a response from his players in this evening’s fixture against Newcastle following the 6-1 Tottenham humiliation.

Murmurings of Mauricio Pochettino’s name are already being heard and the fact the Argentine boss remains unemployed will do no Solskjaer no favours if results continue to suffer.

Ex-Liverpool midfielder Murphy believes the Norwegian will become the latest fall guy at Old Trafford after another transfer window of haphazard recruitment. 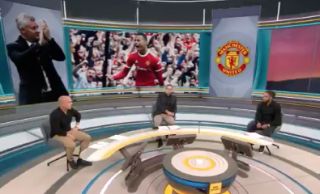 “Manchester United have had a very shaky start to the season and I don’t see them qualifying for the Champions League this season,” Murphy told the Football Index Podcast, as quoted by the Manchester Evening News.

“I don’t expect Solskjaer to survive the season as Manchester United manager. I like Solskjaer, but the recruitment has let him down and I expect him to pay the price.

“I think the balance of the squad isn’t right defensively and they’re far too easy to play against.

“Their captain Harry Maguire has looked well short of his best and obviously has distractions off the pitch. Even Wan-Bissaka looks like a shadow of the player we saw making tackles for the club last season.

“Pogba and Fernandes are exciting creative talents, but with them both in midfield I think it leaves too much responsibility on others to cover for them. ‘They simply won’t be competitive while they concede goals as they do.”

Most United fans share Murphy’s view that Solskjaer has been let down by those above him in the transfer window.

This summer should have been used to create a platform to close the gap on the likes of Liverpool and Manchester City but instead United have fallen behind with key areas of weakness in the squad still not addressed.

Anyhow, Solskjaer’s main focus on Saturday will be securing victory at Newcastle, and the Reds will certainly have enough talent on the pitch to get the job done.