Ole Gunnar Solskjaer’s tricky reds face a tough challenge at St James’ Park this Saturday night. With the side missing Anthony Martial due to suspension, Ole has a big decision to make as to who starts in place of #9.

Not much of a surprise here – despite his consistent shaky performances over the past year. Solskjaer has addressed the competition between de Gea and Dean Henderson, saying: “Dean Henderson has come in and he’s making this goalkeeper department a joy to watch. The level in training has been unbelievable.” Since the beginning of the 20/21 season, the Spaniard has been impressive at times, notably making some huge crunch-time saves in our dramatic win at the Amex Stadium.

Aaron himself would admit that his start to the season hasn’t been his strongest, but you can’t forget the campaign he just had in 2019/20 for United. As the season progressed, Wan-Bissaka showed huge progress and improvement in the attacking side of his game – as shown in the Sky Sports graphic below. Defensively, the full-back led the 19/20 Premier League season in 2 different categories – tackles (129) and blocks (101). This selection is a no brainer. 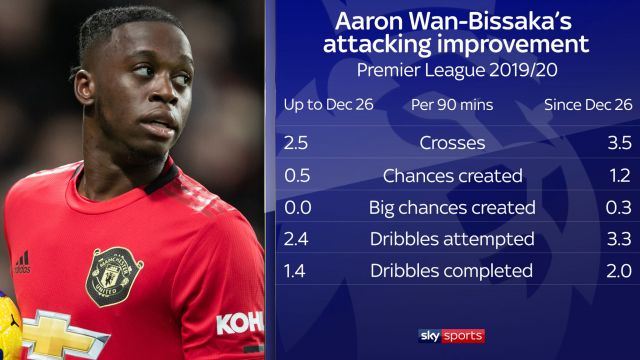 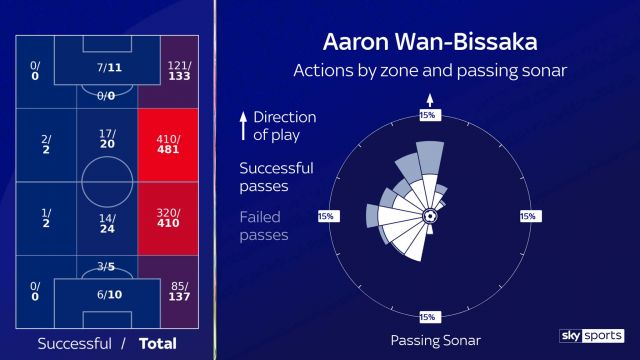 Manchester United’s new £13.4million man surely deserves a shot after Luke Shaw’s disaster against Tottenham. The Brazilian surely couldn’t do any worse – having proven himself already as one of Europe’s most elite left-backs. The left-flank of Rashford and Telles is a very interesting prospect, with Telles being much more attacking-minded than Shaw. Hopefully we’ll see Rashford’s full potential unlocked with some quality support behind him.

I’ll admit it, I’ve been very critical of the Swede in the past but after watching Bailly attempt to play the beautiful game of football against Spurs, I’d seen enough by half-time. With the Ivorian’s recent injury picked up on international duty against Belgium, he could be a doubt for the trip to Tyneside. Unless Solskjaer decides to throw youngster Teden Mengi into the deep-end for his first Premier League start, he really doesn’t have any other viable option than Lindelof.

Much like his teammates, captain Harry Maguire is also coming off a poor performance against Mourinho’s Spurs. The England international has been the subject of unfair online trolling and abuse since he joined The Red Devils back in August 2019. In light of all this criticism, Maguire’s stats in the 19/20 season proved to be similar to those of world class talents Virgil van Dijk and Kalidou Koulibaly – as shown in the graphic below. Those calling for Maguire to be sold immediately seem to forget his leadership and strength at the back guiding United to a 3rd place league finish and the Europa League semi-finals. He more than deserves another chance, and will be a key part to Solskjaer’s system for the foreseeable future. 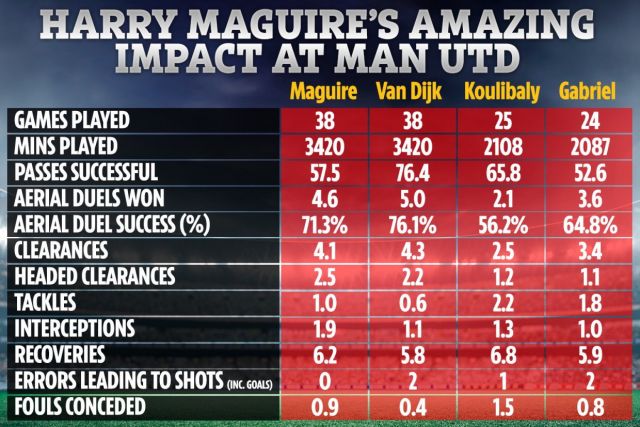 After the horror show at Old Trafford just over 10 days ago, it was clear that the Serbian’s defensive presence was missed badly. If Nemanja Matic started that game, United aren’t conceding 6 goals – simple. Whilst his age (32) might be beginning to creep through, he’s always been known as Mr. Reliable. His experience and leadership will be vital in trying to jumpstart this side into a run of good form.

After an impressive international break for The Scotsman, McTominay is my one of my choices to play ahead of Nemanja Matic on Saturday. After coming on as a half-time substitute against Tottenham, Scott failed to put a foot wrong, keeping it neat and tidy when finding the ball at his feet. McTominay recorded the highest rating per SofaScore in our opening day defeat to Crystal Palace, and bagged a goal in the Carabao Cup against Brighton. Before his unfortunate injury around Christmas 2019, Scott proved himself as a key member to the team and instantly became a fan favourite. If he can regain that form and continue to impress, there’s no reason why he can’t solidify his place in the starting lineup for the remainder of the season.

Saturday’s 8pm kickoff should see new signing Donny van de Beek get his first Premier League start in the famous Manchester red. The Dutchman has impressed massively in his cameos this season, managing a goal in the opening day defeat to Palace and an assist in his start against Brighton in the cup. After Paul Pogba’s recent criminal displays, he has to be dropped and who better to take his place?

Seeing the proposal of Dr Marcus Rashford MBE starting up front for United must remind us all of the period when Ole first took over the club – Marcus taking the #10 role and tearing it up. The performances against Tottenham away, Bournemouth at home and Leicester away are highlights that come to mind. Having began his career at United as a striker but being forced out wide due to teammates like Zlatan Ibrahimovic and Romelu Lukaku, it’d be great to see Rashford rekindle the role he adapted after making THAT debut in the Europa League. He has the killer instinct and everything it takes to be Manchester United’s man leading the line.

Having also began his career as a striker, Greenwood has been forced out to the right-wing due to Anthony Martial’s presence in the middle. Lucky for Mason, there is no Martial to worry about for the next 3 league games. I have no doubts that Greenwood will be an even better striker than he is a right-winger. The likeness in his game to United legend Robin van Persie is uncanny, and one fans are craving to see more of. Manchester United haven’t played a 2 striker formation in a very long time, so it is unlikely that Ole will go ahead with the Rashford-Greenwood partnership and instead pick a front three of Rashford-Greenwood-Mata. Mason Greenwood is one of the most versatile forward players I’ve witnessed in my lifetime, wherever he plays he will score. 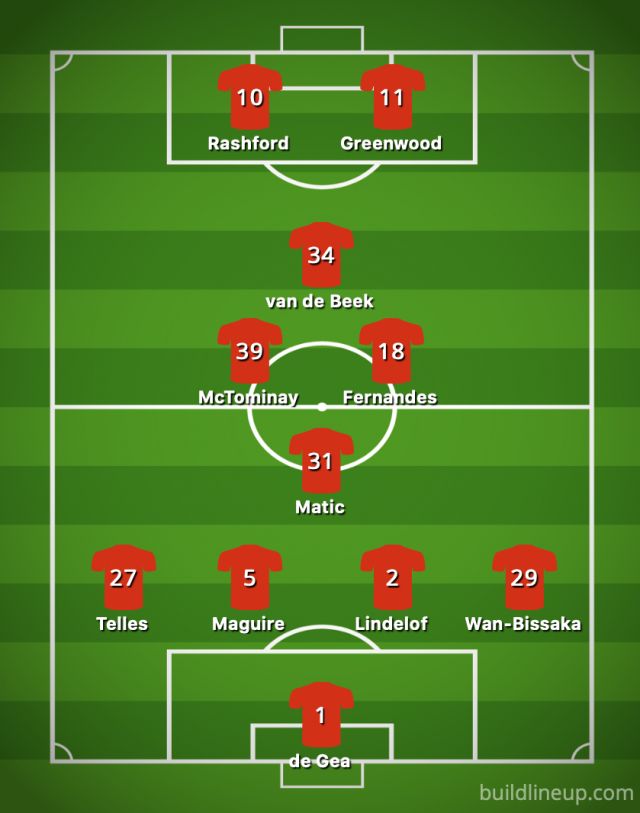