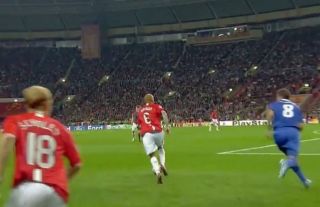 Manchester United famously recorded a penalty shoot-out win over Chelsea in the 2008 Champions League final, after a 1-1 draw in Moscow, to lift the European Cup for a third time in the club’s history. It was a night full of drama.

Wes Brown started the match and it was his stunning cross that led to Cristiano Ronaldo scoring with a towering header in the first-half.

Brown earned a second Champions League medal of his career that night in the Luzhniki Stadium, after being a young member of Sir Alex Ferguson’s Treble-winning squad back in 1999.

The cross itself was superb. Brown puts it on a plate for Ronaldo who lives for such opportunities.

Since it’s his 41st birthday today, The Sportsman has posted a video of Brown assisting Ronaldo for the opening goal in United’s 2008 Champions League final against Chelsea.

"With orange hair beware, come and have a go if you dare…"

The goal still sends shivers down my spine, and it’s remarkable how Brown spotted that it was Essien marking Ronaldo and there was no way the Chelsea midfielder was winning the ball in the air.

That said, the height Ronaldo jumps is incredible.