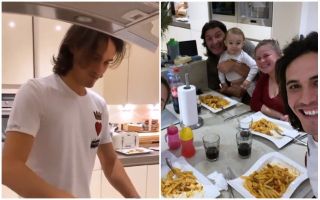 Manchester United’s latest big-name signing Edinson Cavani appears to have made a hilarious translation gaff after posting a picture of himself cooking with the caption “I touch myself…”, erm… okay.

Cavani, 33, joined United on deadline in a free transfer due to the Uruguayan striker’s contract expiring with Paris-Saint Germain earlier this summer. The prolific forward’s switch to Old Trafford was confirmed on the club’s official website ManUtd.com.

In a hilarious post, the South American has posed to his new fans whilst snapping himself cooking up a dish with the image’s caption saying “I touch myself.”

Too much information, Eddie.