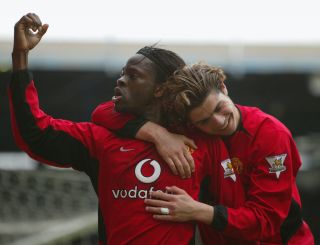 If you had to use one word to describe Louis Saha’s footballing career at Manchester United then the word unlucky would rank high amongst the list. Throughout his four year stay at Old Trafford, Saha was plagued with injuries however when fully fit the Frenchman proved himself to be more than capable of delivering the goods for Manchester United when they needed him most as he went on to play a key role in the clubs Premier League title winning campaign back in 2006-07 and the League Cup triumph back in 2006.

Looking back now it’s crazy to think that its 16-years-ago since Sir Alex Ferguson brought Saha to the club from Fulham in the January transfer window of 2004. The deal was worth just over £12 million pounds and given the extraordinary spending of today’s clubs on paper he was worth every penny, if not more.

Like mentioned above injuries did unfortunately take its toll during the striker’s time at the club and you can’t help but feel if he didn’t get as many injuries then he could have gone on to become one of the club’s most prolific goalscorers. That still shouldn’t take the shine off Saha’s time at United and his contribution to the club should get the recognition it deserves.

It couldn’t have started much better for Saha. A debut goal and assist in a 3-2 victory over Southampton at Old Trafford followed by a double in a 4-3 victory against Everton at Goodison Park. His fine start to life in a red shirt continued as the season went on with the Frenchman scoring more crucial goals as United finished the campaign with the FA Cup trophy.

However the following season (2004/05) would be were injuries became evident as the forward missed many vital games leading him to just make a mere 22 appearance’s in all competitions. This run of bad luck stuck with Saha throughout the following years at Old Trafford and would ultimately prove to be his downfall but his contribution should still not go unnoticed.

He may be best remembered amongst the United faithful for his contribution in the club’s League Cup success back in 2005/06 when Saha led the line, even replacing then United forward Ruud Van Nistelrooy in the starting eleven. In all he scored a total of 6 goals including a goal against Wigan Athletic in the final and netted against Blackburn Rovers in both semi finals. Without Saha United would not have won the League Cup that year.

However it would be the start of the 2006-07 campaign where the United faithful would get to witness the very best of Louis Saha. His superb performances didn’t get the hype or praise in the media mainly down to Wayne Rooney and Cristiano Ronaldo but there can be no doubt he became just as important in the early half of the campaign from moments such as scoring the winner against Blackburn Rovers to scoring the opening goal in the all-important clash against Jose Mourinho’s Chelsea side at Old Trafford.

It wasn’t just in the Premier League either.

When Europe came around Saha didn’t go into hiding. Instead he delivered in empathic style scoring twice against Celtic and scoring the winner away at Benfica ensuring United qualified from the group stages. Saha’s form pre-Christmas was arguably the finest he produced in his career and I stand by that without Saha’s impact pre-Christmas United would not have won the League.

His time at the club was officially brought to an end in August 2008 where it was announced the Frenchman would be signing for Everton. With so many big names at the club at the time it was always going to be hard for Saha to grab the headlines but without him United wouldn’t have been as successful and his contribution to the clubs league cup victory in 2006 and the first half of the 2006/07 title winning campaign should not go unnoticed.