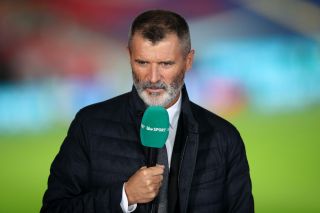 Roy Keane accused the Manchester United squad of trying to claim another managerial victim from the dugout.

It’s not like the Irishman to hold back and ITV rubbed their hands together during the latest international break when they could sniff a rant coming.

Keane was still livid at the 6-1 defeat his old club suffered against Tottenham Hotspur on Sunday.

“I’ve been saying it for the last 12 months, year and a half… their performance against Spurs was disgraceful,” he said (quotes via Manchester Evening News). “You all have bad days in football. Some of the players were a disgrace to the Man United badge.

“Disgraceful. Too many bluffers and, ultimately, these players will cost Ole his job. The players he has got there — they threw the previous manager [Jose Mourinho] under the bus [and] they will do the same to Ole.”

A strong claim but I don’t think Keane has been repeatedly saying this for 12 months, or a year and a half.

United are far from the finished article and there’s a lot of work to do if Solskjaer plans to keep us in the Champions League season after season.

Sadly that is his job in the eyes of the Glazer family, whereas the fans want to see United back on top of English football and fighting for silverware in Europe.

Keane forgets that the squad has changed a lot since Solskjaer came in.

Of the regulars in Solskjaer’s squad only David de Gea, Victor Lindelof, Luke Shaw, Nemanja Matic, Paul Pogba, Marcus Rashford and Anthony Martial were involved in the final weeks of the Mourinho era.

Are they solely to blame for repeating the apparent offence suggested by Keane?

I don’t think the situation is as simplistic as that…