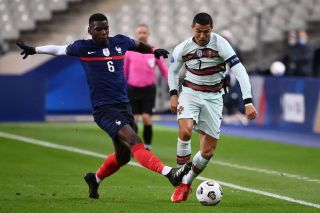 France and Portugal faced off last night in the UEFA Nations League, a match that ended in a 0-0 stalemate.

Stars such as Bruno Fernandes, Cristiano Ronaldo and Kylian Mbappe took to the pitch for their respective national teams.

But it was Paul Pogba who was praised by a teammate for his effort throughout the game.

It was a matchup between two Manchester United stars on Sunday as Pogba operated in the France midfield against Bruno Fernandes playing for Portugal.

After missing action for nearly a year due to injuries, Pogba has returned to the France squad and initially began to stand out as one of the best players on the pitch. He played the full 90 minutes and registered three shots on goal, as per GOAL.

“Very present, he wanted the ball. He put on his voice. He is a leader, and we fell for it. After a year of absence, we felt him in the legs. But he was fine,” French goalkeeper Hugo Lloris said after the match.

The question for Ole Gunnar Solskjaer is can United get Pogba back to a level for United that should see his teammates at club level speaking about him the same way.

But problems still exist at Old Trafford for the Frenchman.

Fingers crossed Solskjaer can get the best out of Pogba and Fernandes in the same team this season.