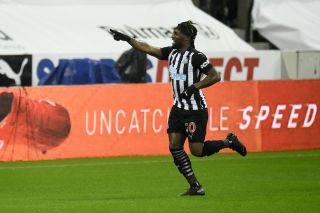 Newcastle great Malcolm MacDonald believes Manchester United could make a move for Allan Saint-Maximin if he continues his destructive form in the Premier League.

Saint-Maximin is one of the league’s in-form players and comes up against Ole Gunnar Solskjaer’s men on Saturday in the first-game after the international break.

The explosive Frenchman delivered a man-of-the-match display in his last Newcastle outing, scoring a wonderful individual goal in their 3-1 home victory over Burnley.

Former Magpies striker MacDonald thinks clubs are now going to be monitoring Saint-Maximin and has suggested United could target the forward if he causes problems at St James’ Park this weekend.

“My old club have to guard against two things,” MacDonald told the Chronicle.

“That’s how good the mesmerising Frenchman is.

“He is brave as a lion. He knows he is going to get whacked because he invites tackles but he picks himself up and goes again. He rides tackles and only an injury can stop him.

“Of course clubs are now on red alert with all the accolades he has received. Including Manchester United, Newcastle’s next opponents. If he rips them to pieces they will be back!”

Saint-Maximin’s raw pace and trickery has always been a threat for full-backs since he arrived in England from Nice last summer.

But the improvement of his final delivery has made him one of the most dangerous wingers in the league and he is likely to trouble a low-in-confidence United defence on Saturday evening.

Saint-Maximin’s rise in performance levels are unlikely to have piqued United’s interest just yet, but 23-year-old is certainly a player to look out for this season.