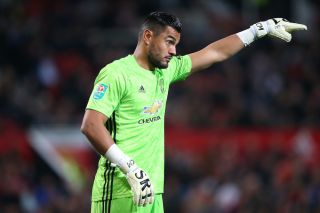 Sergio Romero was left frustrated on transfer deadline day when Manchester United turned down a loan offer from Everton, which included a £2m fee and the coverage of his entire salary, as per The Athletic.

The Argentine, 33, has one year left on his £100,000 per week wages and United are holding out for a transfer fee of at least £8m even though Romero has slipped down the goalkeeper’s pecking order following the return of Dean Henderson.

Romero was omitted from Ole Gunnar Solskjaer’s Champions League squad last week. The report suggests the keeper was not told in advance that he would not be making the squad — with Lee Grant selected as third choice behind David de Gea and Henderson.

There is no denying that the former Sampdoria shot stopper has been a good servant to the club, winning the Europa League in 2017 as an important presence between the sticks.

An indication of frustration from the Romero household exists online. His wife took to Instagram on deadline day to say: “Sergio Romero worked hard for his club. Last trophy they won, they lifted with him. He helped the team reach 4 finals/semi-finals and then he was left on the bench only to lose them all. It is time for them to return to the opportunity and let him go. RESPECT FOR ONE!!!!”

Sergio Romero’s wife has posted this on Instagram with 3 hours of the transfer window remaining pic.twitter.com/uY1QlC8Quk

Everton signed Robin Olsen on loan from Roma on deadline day instead.

Romero could see move to the MLS since the transfer window in the US doesn’t close until October 29.