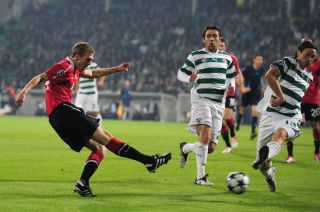 Let’s be honest here, when Darren Fletcher first stepped onto the Old Trafford turf against FC Basel back in March 2003 you couldn’t have foreseen the then young Scot going on to become a first team regular at the club, he just didn’t look like he had it in him to become a United player.

However, in a career that spanned 12-years at Old Trafford, Fletcher went on to become an essential part of the Manchester United team — fast becoming one of Sir Alex Ferguson’s first names on the team sheet when the big games came calling.

He may not have many tricks or the flicks in his locker but in what he lacked he more than made up for in work rate. It didn’t matter whether it was the 1st minute or the 90th minute, we could always rely on Fletch to hunt down the opposition and win the ball back. He may not have been a player who necessarily grabbed the headlines every week but his importance to the side should never be underestimated.

Cameo’s in the 2002/03 campaign eventually led to Fletcher been handed a regular first team spot in the Manchester United side as the following season got underway. Despite playing somewhat out of position on occasions on the wing the early signs were promising for the young Scot. He might not have set the world alight but he was doing a job for the side and that’s what mattered to Ferguson. He rounded off what was a fine debut season by starting against Millwall in the FA Cup final in Cardiff helping United secure a 3-0 victory.

Despite a slow start to the 2004/05 season, Fletcher yet again found himself back in amongst the United first team, scoring his first goal for the club in a 2-0 win against Middlesbrough. He followed that up by scoring goals against Charlton Athletic and Southampton as Fletcher ended the season making in all 30 appearances netting 3 goals. It may not have been as impressive as his debut campaign, but you could clearly see the development Fletcher was making as a player.

Playing alongside the likes of Paul Scholes and Roy Keane in the centre of the midfield at such a young age turned out to be a crucial experience for Fletch and one he would no doubt learn and benefit from, with arguably the standout moment coming back in October 2005 where after suffering a nightmare 4-1 defeat to Middlesbrough at the Riverside Stadium the Scottish midfielder received harsh criticism from then United skipper Roy Keane. This was arguably a pivotal moment in Fletcher’s Old Trafford career. Would he respond to his critics and prove the doubters wrong or would he take the easy way out and leave the club. The answer would be of course he would stay prove the doubters wrong, and what better way to respond to your critics by than scoring the winner against Chelsea at Old Trafford. His clever looping header at the back post drifted over Peter Cech giving United a crucial 1-0 victory.

Throughout the following seasons, Fletcher again played his role in the club’s success on the field as United went on to win back to back Premier League titles and the European Cup in Moscow. The arrivals of Michael Carrick, Owen Hargreaves and Anderson in the centre of midfield made regular first team opportunities for the Scot hard to come by but he still managed an impressive 64 appearances over the 2 campaigns, (2006/07, 2007/08) however It wouldn’t be till next year where we would finally start to see the very best of Fletcher.

It couldn’t really have started much better for the Scot as we began the 2008/09 campaign, scoring United’s first league goal of the new season against Newcastle United at Old Trafford with a delightful finish and scoring the all-important winner down at Fratton Park handing United a crucial 1-0 victory. Goals then followed against Everton at Goodsion Park and Gamba Osaka in the Club World Cup.

If anyone doubted just how important Darren Fletcher had become to Manchester United, then the UEFA Champions League final against Barcelona in 2009 would be the moment were we realized just how important he actually was. After been shown a red card against Arsenal in the previous round, it meant Fletcher would have to sit out the clubs biggest game of the season. To say we missed him would be something of an understatement; we just didn’t look the same side without him. Many put the loss down to the magic of Messi, but it was Barcelona’s midfield pairing of Xavi and Iniesta who were the real trouble makers pulling the strings in the centre of midfield. You couldn’t help but feel if Fletcher was in the side that night it could have been a different story and we would have retained the European Cup.

Despite the loss of Cristiano Ronaldo and Carlos Tevez the following summer, the 2009/10 would arguably turn out to be Fletch’s finest season ever in a Manchester United shirt, as the club remained challenging on all 4 fronts. In a much hyped and tempered Manchester Derby, Fletcher again stood up and delivered when it mattered most, scoring 2 headers as United went on to famously win 4-3. Goals then followed with a stunning half volley against Everton and a cheeky header at the back post against AC Milan in the European Cup. His consistent and superb performances that season eventually led to Fletch been handed the captains armband for the first time in his United career against West Ham United and was even named in the PFA Team of the year.

Unfortunately his appearances became limited after Fletch suffered with ulcerative colitis which would see the Scot take a break from the game as he recovered.  He made his long anticipated return to the united side in December 2013 coming off the bench, in the club’s 3-0 victory over Aston Villa. Just to see Fletcher back in a Manchester United shirt again was fantastic to see, it didn’t even matter how he even preformed, it was just brilliant to see him come back.

His time at the club was finally brought to an end on the 3rd February 2015, where Fletch joined West Brom on a free transfer. His stay at the club may be over but his contribution to the club will never be forgotten amongst the United faithful.