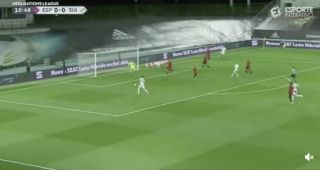 Manchester United’s number-one pulled off a decisive save during his country’s Nations League match against Switzerland last night.

De Gea, 29, has had his critics in recent times after the last two domestic seasons have seen the Spaniard put in a series of inconsistent and error ridden performances.

However, the United keeper was back to his best whilst on international duty last night as the Spanish international pulled off a superb save after just 10-minutes to keep his country level at 0-0.

De Gea’s first-half heroics proved to be even more important come the final whistle as Spain won the game 1-0 with the only goal of the game coming from Mikel Oyarzabal.