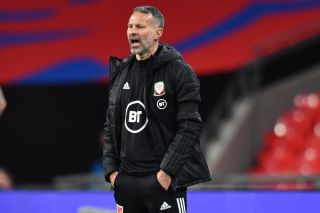 Mark Hughes believes Ryan Giggs could put himself in contention to become next Manchester United manager with a successful European Championships campaign with Wales.

Giggs achieved Euros qualification with a talented young Wales side in his first role as manager to make only the country’s third major tournament in their history.

The United legend was heavily linked with the Old Trafford hot seat after Louis Van Gaal was sacked just after an FA Cup triumph in 2016, but the club opted for Jose Mourinho.

And Hughes believes that Giggs’ stock as a manager is rising, and he could soon have a better chance of managing the club he spent his entire career at.

“Ryan is in a good place in his management career. He is on an upward trend,” Hughes said, as quoted by BBC Sport.

“He is probably more likely to get an opportunity at Manchester United than he was when [Louis] van Gaal left [in 2016].

“Maybe they felt his management CV wasn’t strong enough at that point, but if he goes to the European Championship and does well, then there’s no reason why he won’t be in the frame.”

“Obviously he was mentored by Sir Alex [Ferguson] for many years and in later years he was able to work alongside him. He then worked very closely with Van Gaal for a couple of years, which I felt was a good decision by him and the club.

“I thought that was with a view to him taking over the role when Van Gaal left. It wasn’t to be, they made the decision to go for a bigger name in terms of management – Mourinho.

“I think that was pushed maybe a little bit because of the appointment at Manchester City of Guardiola. Maybe they felt they needed like for like, which probably affected Ryan’s chances.”

Giggs initially worked as a coach under David Moyes, and was appointed player-manager for four games after the Scotsman was relieved of his duties.

He assumed the role of assistant manager to Van Gaal when the Dutchman was appointed in 2014, and left United when Mourinho replaced him two years later.

Giggs’ first major tournament with Wales takes place this summer after the Euros was delayed a year due to coronavirus.

However, we don’t believe he should be considered for the role as United boss until succeeding in a club job.

According to the Mirror, Ed Woodward would not be hesitant to sack current manager Ole Gunnar Solskjaer, who is under increasing scrutiny after a poor start to the season.

But surely Mauricio Pochettino, who remains out of work, would be more likely to replace Solskjaer than Giggs should the Norwegian become the latest fall guy to the negligence and ineptitude of Glazer ownership.