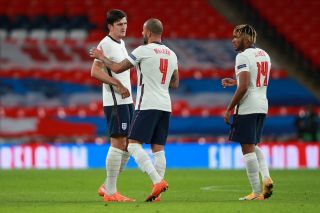 Manchester United captain Harry Maguire put on a passing masterclass earlier this evening whilst on international duty with England.

Maguire, 27, was named in Gareth Southgate’s starting eleven to face-off against Romelu Lukaku’s Belgium who are also ranked as the FIFA number-one side in the world.

Having experienced recent criticism after a series of mishaps and errors domestically, the English centre-back reminded the world why he carries a £78.3m price-tag.

Maguire signed for United last summer from Leicester City and became the world’s most expensive defender, however, despite featuring in every single Premier League match last season, the Reds’ captain has recently come under fire after several mistakes have led to points dropped.

However, whilst on international duty earlier this evening, Maguire boasted seriously impressive passing stats after 78 successful passes out of 81 saw him become his country’s most effective ball player.

Maguire is scheduled to return to club action next weekend when his side face Newcastle United on October 17 in the Premier League with Ole Gunnar Solskjaer hoping to put last weekend’s abysmal 6-1 defeat to Spurs well behind him.

If Solskjaer’s captain can emulate his performance tonight next weekend, United will definitely have every chance of seeing off Steve Bruce’s Magpies with ease.

Harry Maguire completed 78 of the 81 passes he attempted vs. Belgium — more than any other England player.