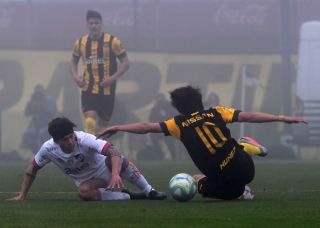 “Pellistri is a young lad and I really love the way he plays the game,” Cavani said about the winger. “He’s the typical South American footballer who has that mischievous nature to his game, and the way he lives his football is a bit like, as we say in Uruguay, being on el campito, as we call it, a makeshift pitch where you have a kick about for fun with your mates or whoever.”

It bodes well for the future that he sounds like a determined young player but may will take time for him to adjust his game to the standards of the Premier League. This is a huge step up in his career but hopefully we get the results we need and he’s introduced to a team doing well rather than one being criticised every week.

“He’s a youngster who has a lot to learn but who has a lot to offer too,” the Uruguayan added. “He’s already shown what we can do at Penarol, in the games where he’s featured. I’ve liked him from the moment he made his first-team debut at Penarol, I liked him a lot. He’s coming here to the club, without a doubt determined to learn and mature as a player, but also to make a good contribution here himself. Learning his trade here is also going to be a great experience for him. So it’s going to be good meeting up with him and travelling together on this journey in this new chapter for us both.”

Cavani is arguably the most exciting signing of the transfer window with the excitement around the Donny van de Beek deal quickly quenched because he can’t seem to find a way into the starting line-up, despite being the only signing made before deadline day.

A lot of United’s business doesn’t make sense. They can change the manager time and time again, but until the club improves at board level it’s always going to be a battle for whoever is in charge of the team.

Ole Gunnar Solskjaer needs a clinical goalscorer and now he has one in Cavani, therefore, we should be better than what we were last season. It doesn’t help that we didn’t have a pre-season — and you can see that with other teams in the Premier League too.