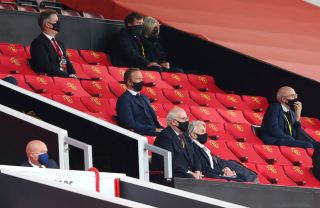 Ed Woodward would reportedly be prepared to sack Ole Gunnar Solskjaer if he can not arrest Manchester United’s awful start to the season.

Solskjaer is under increasing scrutiny after the Reds were defeated 6-1 at home by Jose Mourinho’s Tottenham Hotspur before the international break.

Resentment within the fanbase, however, does not lie with Solskjaer with supporters again furious that Woodward and co. couldn’t secure the Norwegian’s top transfer targets.

In a haphazard transfer window, United ended deadline day with four new signings, none of whom immediately strengthen the key problem positions of central defence and wide forward.

As per ESPN, the club missed out on all of Solskjaer’s main targets including Jack Grealish and Jadon Sancho.

But if results don’t improve, Solskjaer will be the latest fall guy to the negligence and ineptitude of Woodward and the Glazer ownership.

According to the Mirror, Woodward is aware of the backlash he will receive if he dismisses Solskjaer, but he is prepared to make that sacrifice for a decision that is in the best interests of the club.

It is added that the club retain an interest in Mauricio Pochettino, who is still unemployed after leaving Spurs in November 2019.

It is claimed by the Mirror that Old Trafford officials are well aware of Pochettino’s situation and he is still a wanted man in Manchester.

The 48-year-old Argentine is said to be ready to take the United job if offered to him having rejected numerous other opportunities during his 11-months out of work.

Solskjaer must turn results around rapidly at Old Trafford or murmurings of Pochettino’s name will grow louder and louder.