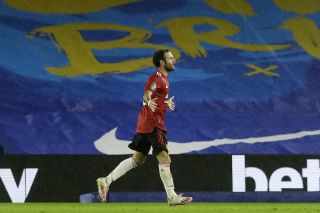 Juan Mata has reportedly been offered a lucrative contract from the Middle East worth in the region of £11.5m per year.

The Manchester United midfielder now faces a decision on his future although his present club would probably have to agree to a mutual termination of his contract.

Aged 32, the World Cup-winner may want another challenge but this would be his final big pay day as a player. He is not a regular at United and fell down the pecking order when Bruno Fernandes arrived at the beginning of the year.

His experience around the squad is considered invaluable to many people at the club. On top of that, Mata has always been a model professional and you’d like to think most of our youngsters will follow his footsteps when it comes to that level of dedication.

According to Ian McGarry, Mata has an offer on the table to leave United to continue his career in Saudi Arabia. He told the Transfer Window Podcast: “We will start at Old Trafford with a shock move for fan favourite Juan Mata, who has been offered a very, very lucrative deal to move from Manchester to Saudi Arabia.

“It’s our offer that Mata has an offer worth around $15m net per year to go and play in the Saudi Arabian league.

“But we are certain that the offer is there, his father, who is his agent, is confident that Manchester United would release Mata on freedom of contract after he had his contract extended by the optional year in his current deal over the summer.

“Mata himself is yet to commit; however, at those kind of numbers you would have to think he would be tempted.

“It certainly is the case that Saudi Arabia is desperate to promote itself as a footballing nation as we know, as well as being a place where players can earn an extremely high amount if money and it would be tax free.”