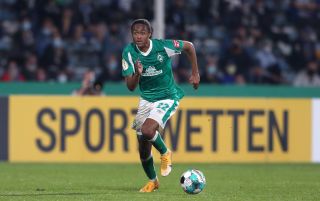 Manchester United fans will be keeping track of Tahith Chong in the Bundesliga this season.

The 20-year-old joined Werder Bremen on loan this summer and I think everyone is excited at the highly-rated prospect experience more first-team football.

Bremen have not chucked Chong straight into the starting eleven and he is being made fight for his place.

In fact, the winger has started just one of the German club’s opening three league games of the season.

Chong got on the score-sheet on Wednesday evening, scoring a brace in a friendly against St. Pauli. Chong spoke about his progress after the match (via Manchester Evening News): “Obviously I would prefer to start matches, but I will still give it my all when coming off the bench. I’m a really patient guy and I will try to keep improving and helping the team.”

By scoring goals Chong will get more games. The two he scored on Thursday should put him into the manager’s plans for upcoming games, and that’s all we want for our players who go out on loan.

Bremen play again on Saturday at 2:30pm against Freiburg. Our fingers are crossed to see Chong start!