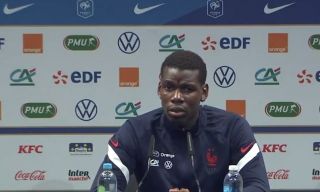 Paul Pogba has said he would love to play for Real Madrid one day.

The Frenchman has not had a good start to the season and his comments are not likely to go down well with Manchester United fans, even though his focus is apparently on helping Ole Gunnar Solskjaer’s side improve on their below par start to the Premier League season.

“Many things have been said,” Pogba told the press on Thursday at France’s training camp, the day after their 7-1 win over Ukraine (via Sky Sports News). “Of course, every football would love to play for Real Madrid and would dream about that. It’s a dream of mine, so why not one day?

"All football players would love to play for Real Madrid. It is a dream for me, why not one day?" 👀

Paul Pogba also says there has been no contact from #MUFC over a contract extension: https://t.co/Ld5nFaHrpI

I have two issues with these comments.

It’s a public call for a transfer to Real Madrid — less than a week after the transfer window closed. A new season has kicked off and United are struggling, so Pogba decides to tell the world he wants out.

Secondly, I don’t buy his talk of focusing on United when he refers to us, his team-mates, as “they”.

Patrice Evra left Manchester United six years ago and he still says we!

Also – anyone notice how Pogba only has courage to speak when away with France?