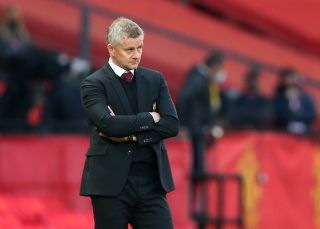 Fernandes, 26, signed for United in January following a transfer from Sporting Lisbon and suddenly became a star player as Solskjaer’s side finished third in the Premier League.

The Portugal international was a key component in the team last season, though he has struggled to have the same impact on the pitch since the beginning of the 2020-21 campaign.

He has been directly involved in 24 goals during his first 26 matches in a United shirt — and you’d have to give him the crown as the league’s best penalty taker.

Fernandes was hauled off at half-time during Sunday’s 6-1 defeat against Tottenham, but he wasn’t the only midfielder who didn’t show up… The decision to take him off was tactical.

A source told The Athletic: “It is not uncommon for a forward to turn round to a defender and say, ‘Any chance of you keeping a clean sheet?’ Sometimes if there’s a bottle in hand things start flying. It can be good to have those exchanges.”

United’s Portuguese maestro is still upset after being substituted early in the match. The report adds Fernandes aired his discontent the most in the dressing room at half-time.

“I don’t think anyone would be pleased getting taken off because it looks to the world like it’s your fault,” the source added.

Another source is quoted: “Bruno can be direct but in this case, he has three games coming with the national team and the impression was that Ole wanted to save him and protect him from getting too frustrated on the field.”

And I thought a lot of these United players lack fire in their bellies.

This comes after the Daily Star claim former Spurs boss Mauricio Pochettino, who was replaced by Jose Mourinho, is being lined-up as the Norwegian’s successor.