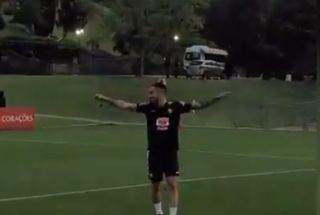 Alex Telles is currently with the Brazil squad on international duty before he links up with his new team-mates at Manchester United.

The left-back made a deadline day switch from FC Porto to Manchester United as Ole Gunnar Solskjaer adds greater depth to his full-back department.

Last season Luke Shaw and Brandon Williams fought for the role at left-back, but we can now throw Telles into the mix.

Competition is good for a squad and Solskjaer wants his players fighting to make the team every weekend.

We can’t wait till he’s doing it for United!

Brazil a preparing for tomorrow’s World Cup Qualifier against Bolivia — and on Wednesday they take on Peru.