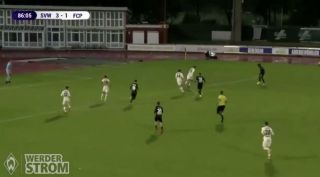 Manchester United winger Tahith Chong has continued his impressive form for on-loan side Werder Bremen after notching another two goals during his side’s game against St. Pauli yesterday with his second eerily reminiscent of team-mate Mason Greenwood’s trademark finish.

Chong, 20, joined the Bundesliga side on a season-long loan at the beginning of this season in an attempt to rack up some valuable first-team minutes and continue his impressive development.

The talented winger has kicked life in Germany off with a bang with his latest contributions coming in his side’s 4-1 win over St Pauli on Wednesday.

Chong netted twice in his side’s win with his second reminding fans of a certain 18-year-old Greenwood.