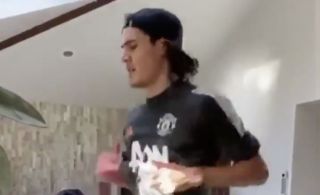 Manchester United’s new number-seven has been spotted working out from home wearing United colours in light of his deadline day switch to Old Trafford.

Cavani, 33, joined United earlier this week during the summer window’s deadline day as a free agent after departing Ligue 1 giants Paris-Saint Germain earlier this summer. Cavani’s arrival was confirmed on the evening of deadline day on United’s official website ManUtd.com.

However, due to quarantine concerns as the ongoing COVID-19 pandemic continues to disrupt the sport, the elite striker’s eagerly anticipated debut against Newcastle United (October 17) may be under threat, as per The Times.

Despite the uncertainty surrounding Cavani, that hasn’t stopped the experienced striker ensuring he is in top condition ahead of the league’s resumption.

How many goals will he score this season? 🤔 pic.twitter.com/rxPlBmPoXN