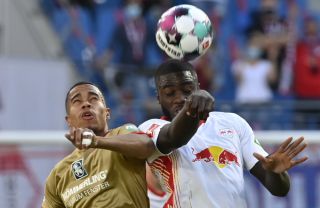 Manchester United are reportedly leading the race to sign highly-rated RB Leipzig centre-back Dayot Upamecano who has a £38m release clause which can be activated as early as next summer.

Upamecano, 21, joined RB Leipzig from RB Salzburg in 2017 in a move which cost Julian Nagelsmann’s side just £9m, as per TransferMarkt.

The young Frenchman has risen to the forefront of European footballing prominence after a series of commanding performances has seen him emerge as a transfer target for some of the sport’s biggest clubs.

The 21-year-old has featured a total of 117 times for RB Leipzig including eight times during their impressive Champions League run last season which saw the German side reach the semi-final stage of the illustrious competition.

According to a recent report from Bild (via Manchester Evening News) the commanding defender is being chased by a host of clubs including Premier League giants Liverpool and Manchester United who are leading the charge to secure his services next summer.

It has been no secret over the duration of the last 12-months that Ole Gunnar Solskjaer is seeking a centre-back and according to the German outlet, the Norwegian manager could be looking to activate Upamecano’s  release clause next summer which stands as a shrewd £38m.

Read more: How Man United should line up after international break with new signings