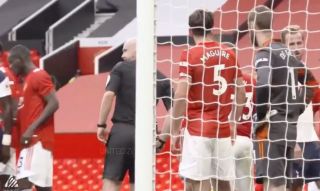 A clip of the incident has gone viral on social media — with United going down to 10-men while Spurs led 2-1, but they went on to rack up a cricket scoreline to beat Ole Gunnar Solskjaer’s side 6-1. His worst defeat as United manager.

Most felt that Erik Lamela also should have been sent off for flicking his elbow out at Anthony Martial, which triggered the Frenchman into retaliating.

However, Maguire’s conversation with United forward Marcus Rashford has been captured by cameras and it doesn’t reflect well for the skipper…

It’s remarkable how Maguire’s team-mate gets elbowed in the face and sent off for retaliating, and he’s shouting there’s nothing wrong with it while Rashford protests.

This isn’t what you want from your captain. And it looks terrible!

Video: Captain Harry Maguire doesn’t agree with Marcus that if Martial was given a red card after review, Lamela should receive one too 😳❓

Why isn’t Maguire complaining to the referee? He needs to tell him to go and look at the monitor.

Not our finest hour.