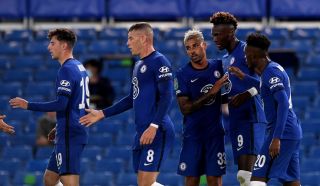 United secured deals for veteran goalscorer Edinson Cavani, teenage wingers Amad Diallo and Facundo Pellistri, as well as Telles on a hectic final day of the window that has divided within the fanbase.

While signings were made, key areas of weakness within Ole Gunnar Solskjaer’s squad were not addressed as an elite centre-back or proven right-winger did not arrive at Old Trafford.

But the poor start to the season from Luke Shaw further exposed the need for competition in the left-back position and Telles is one of the most exciting attacking full-backs across Europe.

Telles, 27, scored 24 times in 127 games during four years at FC Porto, proving he has a true goalscoring threat from defence.

The Brazilian could allow Solskjaer to play a new five-at-the-back system with Telles at left wing-back and Shaw occupying the left centre-back role where he has previously impressed.

But it has emerged that United had another Brazilian as a plan B option if a deal for Telles fell through.

Transfer expert Fabrizio Romano has confirmed on his ‘Here we Go’ podcast that Chelsea full-back Emerson Palmieri was considered as an alternative.

Emerson hasn’t made an impact at Stamford Bridge since his arrival from Roma two seasons ago and supporters will be relieved that the club weren’t forced to move for the 26-year-old.

The plan B for #mufc, if they had problems in the Alex Telles deal, was Chelsea's Emerson Palmieri #mulive [@FabrizioRomano, @podcastherewego]