The international break gives time for the dust to settle on Manchester United’s haphazard transfer window and joint-worst Premier League defeat in their history.

Ole Gunnar Solskjaer is under pressure and his squad remains short, but performance levels have to drastically change if United are to kickstart their season.

The Reds face Newcastle away on their return on October 17, a tough fixture against a side high in confidence with seven points from their first four games.

Solskjaer already has a selection problem up front with Anthony Martial serving a suspension for his petulant sending off against Tottenham and Edinson Cavani’s debut delayed by covid regulations.

As per BBC Sport, Cavani has not been part of an athlete bubble since leaving Paris Saint-Germain as a free agent in June so will have to enter a 14 day isolation period.

Cavani’s absence means Mason Greenwood should get a chance to lead the line with Odion Ighalo poor in his Carabao Cup showings.

Greenwood was exposed for not fulfilling his defensive duties on the right-flank against Tottenham but could be more effective in a central role where he played most of his academy football.

Daniel James is often criticised for his final product but is brilliant when tracking back and could provide necessary support for Aaron Wan-Bissaka coming up against one of the league’s in-form players in Allan Saint-Maximin.

There should be no such problems for Cavani’s fellow deadline day signing Alex Telles and the exciting Brazilian should replace the below-par Luke Shaw.

Telles is more of an attacking threat than Shaw having scored 24 times in four years for FC Porto and should bring fresh enthusiasm to a team starved of confidence.

Solskjaer should also give a first Premier League start to other new signing Donny van de Beek alongside Nemanja Matic in a midfield pivot.

Paul Pogba has looked way off the pace in the opening three games of the season and van de Beek has done more than enough in two Carabao Cup games to earn his chance.

Meanwhile, there has been some positive news with Axel Tuanzebe returning to training at Carrington after a 10 month-layoff.

According to the Telegraph, Tuanzebe is working hard to challenge for a first-team spot again.

While the Newcastle fixture may come too quickly for the England u21 international, Victor Lindelof and Harry Maguire continue to struggle so it may be worth giving him a chance. 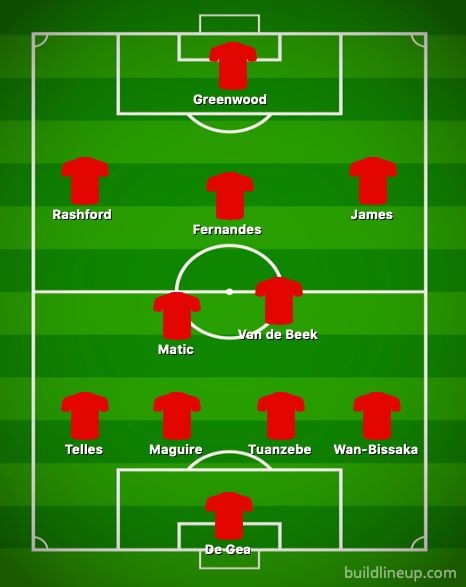