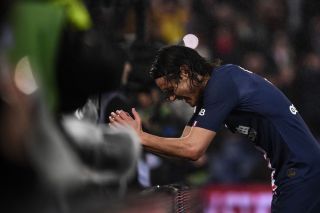 Edinson Cavani is in danger of missing Manchester United’s next Premier League game.

The reason being the striker is in quarantine after completing his free transfer to Old Trafford, according to The Times, because under government regulations anyone arriving into the UK from France (where Cavani has been living up until now) has to quarantine for 14 days.

However, there is an exemption for elite athletes who are regularly tested.

Paul Pogba is in a bubble with the France squad so he will not have to quarantine when he returns from international duty.

If Cavani has to self-isolate for 14 days he will miss United’s match at Newcastle.

That is a blow for Ole Gunnar Solskjaer who is already without Anthony Martial, who is suspended after picking up a red card against Spurs. This match sparks the start of his three-game suspension.

Cavani and his partner Jocelyn Burgardt tested positive for coronavirus just over a month ago after going to Ibiza with his former PSG team-mates Angel Di Maria and Leandro Paredes and their partners.

While this is a blow it’s completely out of United’s hands. Why on earth did they wait until transfer deadline day when Cavani was available all summer long?