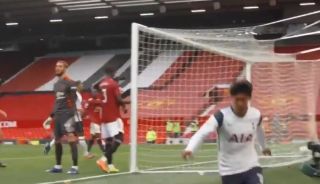 Luke Shaw’s defending at the weekend against Tottenham Hotspur was a shambles. It’s a blessing that we secured a new left-back on transfer deadline who will push for a place in the starting line-up.

That should keep Shaw on his toes but he must do better than what he did against Tottenham, as United lost 6-1 on Sunday. The result wasn’t entirely down to the England international but it’s an area of the pitch where United must do better.

In a video doing the rounds online this morning you can hear De Gea screaming at Shaw throughout the move that led to Son Heung-min’s goal to make it 4-1 in the first-half.

De Gea can be heard asking Shaw to run more to keep up with Tottenham’s move, with Tottenham right-back Aserge Aurier in plenty of space.

After the goal goes in, the United goalkeeper shouts: “what is your problem?”

Video: De Gea was not happy with his defence against Tottenham @utdclip from r/reddevils