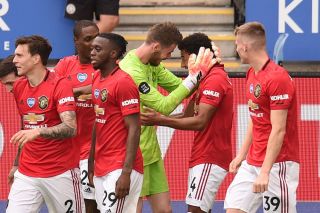 FC Porto are reportedly considering offering out-of-favour Manchester United midfielder Jesse Lingard a route out of his recent United nightmare by bringing him to Portugal on a season-long loan.

Lingard, 27, has been with United throughout the entirety of his career having joined the Reds’ famous youth academy all the way back in 2000.

The English midfielder managed to force his way into United’s first-team plans during the 2015-16 season after a series of successful English loans included spells with Leicester City, Birmingham City and Derby County.

Lingard’s greatest contribution came when he scored a 110th minute winning goal against Crystal Palace in the 2016 FA Cup final. The United midfielder’s late heroics ensured the illustrious trophy would be returning to Old Trafford for a twelfth time.

However, after recently falling out-of-favour with current United manager Ole Gunnar Solskjaer, Lingard’s long-term United future has been cast into doubt throughout the summer with links away from the club included rejoining former boss Jose Mourinho at Spurs, as per Fabrizio Romano.

Lingard > Tottenham possible only if Dele Alli will leave. Let’s see on next days.

With England’s summer transfer window now closed as of 11pm last night, Lingard’s move to Spurs of course failed to materialise, however, the latest in the ongoing saga comes from ESPN’s Rob Dawson who claims Lingard could be subject to a late swoop from FC Porto.

The Portuguese market has yet to close with the deadline not scheduled until midnight tonight, however, there are still a few days left to conclude loan moves and Dawson reports one player the Liga NOS champions could be considering is United’s Lingard.

Transfer window still open in Portugal and Porto showing interest in Jesse Lingard. Would be a season-long loan if it happens.

United and FC Porto demonstrated their good working relationship as recently as yesterday after the Reds confirmed the signing of left-back from Alex Telles (ManUtd.com) however, if the two clubs are to draw upon their previous positive transfer experiences for the loaning of Lingard, they will need to act quickly.