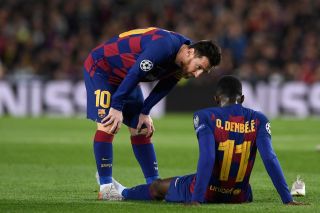 Ousmane Dembele will not be joining Manchester United before tonight’s deadline.

The Frenchman was seen as an alternative option to Jadon Sancho. A short-term one at that.

Manchester United were only interested in signing the winger on loan before Barcelona changed their stance late on by opening the door to such a move but only if the 23-year-old extended his contract by a year, as per David Ornstein of The Athletic.

🚨 Manchester United’s proposed move for Ousmane Dembele is off. #MUFC were only interested in loan whereas Barcelona wanted sale. #FCBarcelona changed stance late on & opened door to loan but only if 23yo France winger extended his contract by a year @TheAthleticUK #DeadlineDay

As a result, it doesn’t look like Ole Gunnar Solskjaer will get his prime target or the next best thing, but it’s extremely difficult when the board leaves everything until the last minute.

Dembele has a terrible injury record and I was never completely sold on the idea of signing him as an alternative to Sancho.

Under new manager Ronald Koeman he should get the chance to put his Barcelona career on track.

It wasn’t long ago this kid was seen as the next best thing.