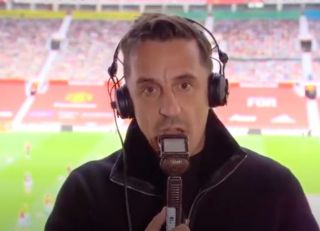 As per BBC Sport, Cavani flew to England yesterday and is likely to sign a two-year contract with the Reds in a surprise late move.

Cavani has been a free agent since his contract at Paris Saint-Germain ended in June and United’s pursuit of the 33-year-old has been far from decisive.

However, BBC Sport notes that the club have been impressed by the player’s desire to join the club and believe his age is not a debilitating factor as he can provide useful experience for younger players.

There is little doubt that Cavani has been one of Europe’s elite centre forwards in the past decade and Ole Gunnar Solskjaer has a talented finisher on his hands at Old Trafford.

Neville has no concerns over Cavani’s attitude but finds the time of his arrival worrying given the club should have fully strengthened before deadline day.

Listen to Neville’s thoughts on Cavani and the club’s transfer business below, via Sky Sports:

🗣"It is very last minute, there is an element also of how have we ended up here" @GNev2 on Manchester United's transfer deals and signing Edinson Cavani pic.twitter.com/BbsF9o0wmP