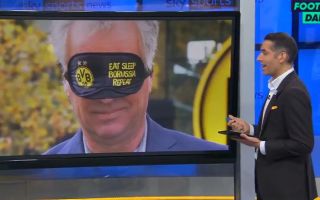 It feels like Gary Cotterill has been camped outside the Westfalenstadion for a lifetime.

The Sky Sports News reporter has been on our screens all summer giving viewers updates on the Jadon Sancho to Manchester United transfer saga.

But sadly for us there is not the conclusion Manchester United supporters were hoping for with Sancho set to stay at Borussia Dortmund, as per The Sun.

Cotterill says the sleep mask he bought in the BVB megastore summarises the Sancho saga because Dortmund have stuck to their word by keeping hold of their main asset.

The SSN reporter ends his report by asking his anchor to wake him up when United make an offer.

Joking at the fact United haven’t made a formal offer for their No.1 target this summer, Cotterill gave the record wearing the sleeping mask.

🗣 "Wake me up if United come in with another offer will ya?"

Cotterill adds that the story is not as big in Germany…