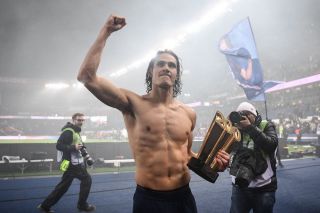 Edinson Cavani has completed his transfer to Manchester United on deadline deal.

The Uruguayan arrives on a Bosman after leaving Paris Saint-Germain earlier this summer. He departed Paris as the club’s all-time top goalscorer and Ole Gunnar Solskjaer is hoping he can bring more goals to his team in Manchester.

“Edinson is an experienced ultimate professional who always gives everything for his team,” Solskjaer told United’s official website as he reacts to the capture of one of the world’s best forwards. It’s not what the manager wanted when he set out his targets at the beginning of the season, but Cavani should deliver goals and get the job done as a short-term option, which is why they’ve given him a one-year deal with the option to extend by a further year.

“His goalscoring record for club and country is fantastic and we are delighted to sign a player of his calibre.

“He’ll bring energy, power, leadership and a great mentality to the squad but, most importantly, he’ll bring goals. He has had a brilliant career so far, winning trophies at almost every club he has played for, and he still has so much more to give at the highest level.

“The opportunity for our young players to learn from one of Europe’s top goalscorers over the last 10 years is fantastic and it will really benefit them going forward.

“Edinson knows exactly what it takes to succeed and we are all looking forward to seeing him make an impact at Manchester United.”

The former PSG and Napoli forward certainly has experience and it will be needed when we play in Europe this season.

Cavani has won the Golden Boot in both Ligue 1 and Serie A, scoring 341 goals at club Lebel since moving to Europe in 2007, so there’s no denying that Solskjaer has got a man who knows where the goal is.

The manager’s job now is to somehow sure up the defence. A task made harder by the club’s reluctance to put they money in their pocket and sign a significantly upgrade on what they’ve got.

Anthony Martial is suspended for the next three matches after being sent off on Sunday in the 6-1 defeat against Tottenham, so Cavani will be expected to start after the break.

It puts Odion Ighalo further down the pecking order but at least Solskjaer has more options when the team needs goals!