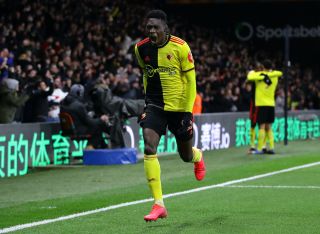 The Hornets are said to be willing to do a deal but it would need to be a permanent switch to convince the Championship club.

That is according to Manchester Evening News, who claim United made an offer of a initial season-long loan with the option to buy at £25m.

Watford apparently value the 22-year-old at around £45m which is significantly more than what United offered to consider should he impress on loan.

It’s a busy day for United trying to get deals done before time runs out (11pm), but they only have themselves to blame for leaving it last minute again.

The MEN report adds that the transfer deadline for Football League clubs is not until October 16th — but United would need to complete a deal for Sarr by tomorrow if they want him to be registered for their upcoming Champions League campaign.

Time is running out…