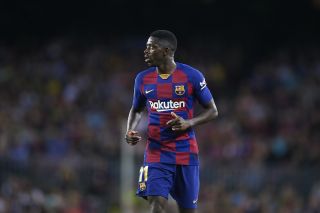 According to RMC Sport in France, Dembele is staying put at Barcelona this season.

The Frenchman, 23, has been linked with a loan move to Old Trafford but reportedly wants to stay at Camp Nou and fight for his place under Ronald Koeman.

Dembele is said to be focused on the season ahead with Barca and with United running out of time to find a right winger, the club’s next turn in the transfer market will be interesting.

ESPN reporter Rob Dawson believes Bayern Munich’s Kingsley Coman is another option being considered at United this morning, but the lack of planning here is clear to see and the board must be aware of the fact they are giving Ole Gunnar Solskjaer a bad hand.

United lost 6-1 yesterday against Spurs and you’d expect them to make a statement signing today.

But let’s not pretend like we would be over the moon with Dembele either.

His injury record should spark warning to United.