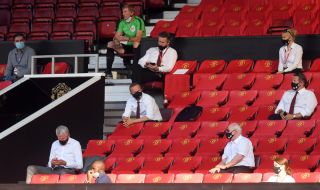 As Manchester United once again survey the damage wreaked by the ghost of transfer windows past, another chapter in the ignominious recent history of this great football club is once more written in the tears of a fanbase who simply deserve more, much more.

Post-mortems across social media very quickly arrived at the most obvious conclusion. The current transfer policy conveys a level of ineptitude probably not seen at any other major football club this century. The truth is that it’s not a surprise to anyone.

You have a chief executive who exudes incompetence, with multiple doomed manager appointments and a litany of failed transfer deals, Ed Woodward simply cannot get the football decisions right. In turn he reports to an ownership who have all the zeal of Mr Burns in their intent on rinsing the club dry at every possible opportunity. All they appear interested in is a bang for the buck, and a Tampa Bay buck at that!

Who knew that such a wholly dysfunctional combination of characters could possibly preside over such a tragic train wreck that it is the modern Manchester United. But let’s face the facts, they don’t exactly come with a great CV. To quote the Tampa Bay Times: “If you are a Bucs fan, you’ve just witnessed the worst decade in team history. The evidence is incriminating even for a franchise known primarily for incompetence.”

As the years roll on without another Premier League title, fans can see the unwanted decade milestone honing into view and Manchester United will pass it unless there is drastic change. This journey requires an illumination amongst the Glazer family of Damoclean proportions. It needs a re-assessment of where United are as a club right now and that starts with honesty.

No more lies, no more spin and no more self delusion. The club have been over-taken by Manchester City and Liverpool and very soon Everton, Tottenham and Chelsea will exploit the malignant failings at Old Trafford and in turn threaten to condemn Manchester United to the wilderness for years to come. The hierarchy need to recognise this and admit it to themselves in order to stop making the same mistakes.

The omens are not good. Peering across the pond and focusing on the Glazer owned Tampa Bay Buccaneers who have recently invested a fortune in acquiring the services of 43-year-old Tom Brady and who also brought Rob Gronkowski out of a two year retirement to link up with his former team-mate. Are these the strategic decisions of an ownership plotting a long-term successful future or are these the actions of a family determined to gloss over the truth in the search of short-term positive press?

Many will conclude the latter and if you are a Manchester United fan you will fear that the template is already well and truly imprinted at Old Trafford. The acquisition of the NFL ageing legends has led to derision in the United States, with many a video meme effectively ridiculing the ineptitude of an organisation in a state of perpetual failure.

Looking at social media since the weekend and Manchester United feature prominently with video after video mocking Maguire’s comical ‘tackle’ on Luke Shaw in the lead up to Tottenham’s opening goal. It is difficult not to draw parallels and fans will be rightly concerned with the short to medium term prospects under the continued tenure of the Glazer family.

As the dust settles and with a challenging set of fixtures post-international break, a cold dawn will break over Old Trafford. With a flimsy defence and an influx of unproven youngsters, Ole Gunnar Solskjaer will rue the lost opportunities and yet it is he that must pick up the pieces and re-build the confidence in a team that many fear are in a decline unparalleled since the demise of Liverpool during the 1990’s.