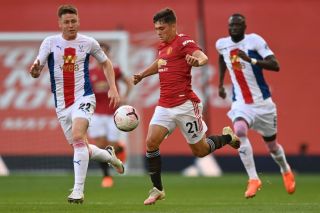 Manchester United are set to keep hold of Brandon Williams and Daniel James today, despite interest from other clubs in taking the pair on loan for the season.

That’s according to ESPN reporter Rob Dawson who adds that United still want to sign a right winger on deadline day.

However, Dawson says the Sancho deal looks dead and Barcelona are unlikely to agree to a straight loan for Ousmane Dembele.

He adds that Bayern Munich’s Kingsley Coman is another option but time is running out for United to get a deal over the line.

Stretty News spoke to Leeds United owner Andrea Radrizzani last week and he admitted that the club are interested in James.

“Dan [James] is on top of our list but seems he will be staying at Man Utd,” Radrizzani said. “There is nothing.”

It would be good business on United’s behalf if they could sell James and make a profit, but not if they haven’t landed their prime target and Dawson’s tweet doesn’t fill us with confidence on the Sancho front.

As for Williams, I think he will get plenty of games this season even though Alex Telles is on the verge of joining from FC Porto.

You can imagine the excuses are being prepared. This is not how a club like United should be working the transfer market.