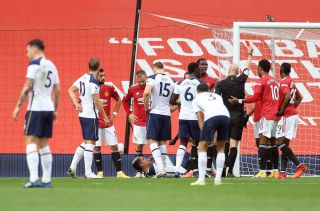 Where to even start?

What an absolute embarrassment. Ripped apart, taught a lesson and smashed to smithereens by a Jose Mourinho side. I’ve seen a 6-1 before, at home to City, but I never thought I’d live to see the day when it happened again. This was supposed to be the season when United closed the gap on Liverpool and City, instead – three games into the season – we’re sixteenth in the league with eleven goals conceded in those ties. I want the season to be over already. I’m exhausted. The ref was a joke and these players even worse. Ole Gunnar Solskjaer’s future must be in question.

Here’s three things we learned. It won’t be pretty.

Can we just end the season now

Just when you think Manchester United have turned a corner and are looking up, every giant step forward is followed by a bigger one backwards. Seeing United capitulate at the hands of a famously pragmatic, defensive manager – our former boss no less – has left me broken, Solskjaer fighting for his future and Jose Mourinho no doubt gloating long into the night. Without the much maligned Victor Lindelof, Eric Bailly was supposed to improve the defence and the performance of Harry Maguire alongside in turn. Instead, it was a calamity as the two were involved in a calamitous mix up for the first goal, Son Heung-Min walked through us for the second and Maguire inexplicably barged Luke Shaw out of the way to allow Harry Kane an easy third. This was an absolute disasterclass, and Mourinho showed no mercy to his former employers. It may only be three games into the season, but United – meant to be pushing Liverpool and City at the top – are sat in sixteenth, with only West Brom having conceded more goals.

Erik Lamela had to have been sent off

On first viewing, I thought Anthony Martial’s red card was incredibly harsh, but on the second look there can be no doubt at all. It’s violent conduct and a red card all day long under the letter of the law. But surely Eric Lamela, deserving of an Oscar for his theatrics, has to be sent off as well? He initiates Martial’s retaliation, sticking his head into the usually placid Frenchman. It’s either both off or neither. United were an absolute shambles both before and after the red card, so it cannot be used as an excuse, but it epitomised one of our worst days in living memory. Anthony Taylor’s failure to send off Lamela no doubt contributed to the final margin, but it can be no excuse for United’s weak minded bottle jobs. Lamela went down like he’d be shot, leaving Solskjaer raging and the Argentine at the mercy of our fanbase. Why VAR could not look at this is beyond me. It worked in getting his opponent sent off, but I’d be embarrassed if that was one of my players.

Where do we go from here? Even if this result has made up your mind on Solskjaer, David Moyes, Louis van Gaal and Mourinho himself should convince you that this club’s problems go far beyond simply the man in the dugout. If Mauricio Pochettino is as good as he’s made out to be, then why did Juventus get Andrea Pirlo? Why did Bayern Munich opt for Hansi Flick? Even the imminent arrivals of Edinson Cavani and Alex Telles have done nothing to lighten the mood. There’s no character, no leadership, no desire and no fight in this side. A catalogue of basic errors and an implosion at the first sign of adversity. You have to question Solskjaer. The board need to go along with a good number of this shower. I had the displeasure of witnessing live the 1-6 against City, at least this wasn’t against our local rivals. Normally there’s positives to take, even in defeat, but this time we don’t even have the slenderest of straws to cling to.

Read more: Opinion: Manchester United are out of excuses