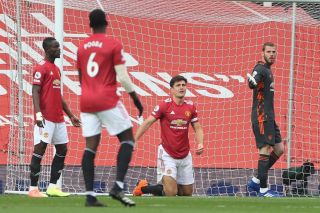 An already poor start to the Premier League season went from bad to worse for Manchester United as they were embarrassed at home to Jose Mourinho’s Tottenham Hotspur.

It’s difficult to put into words how truly awful that United performance was. Lifeless, empty and humiliating are some words that spring to mind. The loss matched United’s worst ever Premier League defeat in its 28 year history. You can blame the result on individual errors, the manager or the work ethic but it all rolls into one. This was a shambles from the rotten top to the bottom.

The selection of Paul Pogba in the starting line-up after a string of poor performances ahead of new signing Donny van de Beek raised eyebrows among fans. Throughout the game, Pogba lost possession 21 times, committed 4 fouls and committed a penalty which was slotted home by Harry Kane. It’s about time the Frenchman was dropped and Bruno replaces him in midfield with van de Beek taking the no. 10 role. It’s apparent that Paul’s head isn’t in Manchester, and hasn’t been for a long time. A move back to Juventus or to Real Madrid would be the best for his career at this moment in time.

Simple defensive practices were thrown out the window – with Harry Maguire and Eric Bailly respectively handing Spurs two goals in the first half. The selection of Eric Bailly over Victor Lindelof was entertained by almost everyone, but soon regretted. When opportunities like this arise for players like Bailly, you have to grasp it and give everything you can. Today, I saw absolutely nothing that made me think Bailly deserves a starting spot in this side. Despite this, the blame has to be shared through the entire backline. A game of headers between Bailly and Maguire saw the first goal conceded of the afternoon, gifting Tanguy Ndombele with an open look on goal.

Bailly was once again caught napping when a quick free-kick from Harry Kane sent Heung-Min Son through on goal to make it 2-1. Simple defensive instincts like that were what United lacked today. Instead of puffing his cheeks, stood with his hands by his side, Bailly should’ve been working to track the run of Son and cut the passing lane.

A poor reaction from Anthony Martial in response to an elbow from Erik Lamela essentially killed off the game for United. Not a single bit of intensity or desire was shown after the Reds went down to 10 men. Tottenham’s third goal was an absolute catastrophe – with Bailly passing the ball straight to Kane in the box who eventually found the back of the net after a string of neat passes from the Spurs attack. United didn’t look switched on or focused at any point after the first 2 minutes.

Two nutmegs respectively from Serge Aurier and Son saw Tottenham extend their lead to 3 goals, with Luke Shaw and Harry Maguire running about like headless chickens on the right flank. Pathetic defending to say the least.

Paul Pogba once again dominated the headlines for the 5th and 6th goals, daydreaming as right-back Serge Aurier was played through on goal to slot it past a deflated De Gea. To make matters worse, Pogba committed a penalty with 10 minutes to play. A criminal display, hopefully one which will keep him out of the side for the foreseeable future.

A beaten-up Solskjaer foreshadowed what was coming in the second half and brought on McTominay and Fred for Greenwood and Fernandes in an attempt to block the leak of goals. Obviously, while the backline remained the same, it didn’t work.

It’s tough to predict where Manchester United go from here. The imminent signing of Edinson Cavani looks to be a blessing in disguise with Anthony Martial now suspended for the next 3 Premier League games. Furthermore, like all of us, I can’t wait to see Alex Telles in the famous Manchester red.

As our manager once famously said, “mountains are there to be climbed”. It’s time to go into the international break with a positive mindset and come out of it with a bounce back win against Newcastle in just under 2 weeks time.

Read more: Opinion: Manchester United are out of excuses